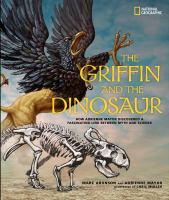 The Griffin and the Dinosaur

How Adrienne Mayor Discovered A Fascinating Link Between Myth and Science

Could Griffins have been real? When Adrienne Mayor carefully read the ancient Greek and Roman descriptions, this mythic hybrid of a lion and an eagle sounded like something people had actually seen. What could explain that evidence? After a decade of hunting through myths, poring over old maps, and tracing the discoveries of modern dinosaur hunters, she found the answer: awesome dinosaur fossils observed by ancient gold-hunters in the Gobi desert. Here is the story of one insightful, curious, and determined woman who solved the mystery of the Griffin, and invented a new science. Now she and others travel the world matching myths and fossils
Publisher: Washington, D.C. : National Geographic, [2014]
ISBN: 9781426311086
9781426311093

A real life Indiana Jones, Adrienne May is a scholar whose fascination with Greek myth led her to discover a scientific basis for the existence of the legendary creature, the griffin. Pouring over ancient texts, searching the remote gold fields of the ancient Scythians and the fossil beds of Mongolia Adrienne Mayor describes the thrill of archaeological discovery.

Is it possible that the fantastic creatures from ancient Greek myths were based on fossils of prehistoric animals? Adrienne Mayor thought so, and took on the challenge of finding proof for her theory. Illus. with color photos and illustrations.

"Where do myths and legends come from? Historian Adrienne Mayor believes that at least some of them can be explained by science. With "the suspense of a detective story" (Publishers Weekly), The Griffin and the Dinosaur describes how Mayor travelled to many countries, tracking down clues and gathering evidence to prove that legends about the griffin -- a part lion, part eagle creature from Greek mythology -- may have their roots in dinosaur fossils. Supported by illustrations, ancient artifacts, and fascinating photos, The Griffin and the Dinosaur is a great choice for archaeology fans as well as readers who are intrigued by mythical monsters." Kids' Books June 2014 newsletter http://www.libraryaware.com/996/NewsletterIssues/ViewIssue/89723f9c-55b6-4257-8882-b1e8ae2fe071?postId=7f13f775-20d0-4cb3-8d09-7107a990fa6a

NYPL Staff Pick
Could dinosaur bones have inspired the legends of the griffin? Were wooly mammoth skulls the reason humans once believe in the Cyclops? Meet the woman who put two and two together and realized how archeology and ancient mythical creatures go together perfectly.
- Betsy Bird

With Marc Aronson and Adrienne Mayor’s hard work, now I have a book before me that clarifies the true connection between the prehistoric and the mythical. Focused through a single woman’s obsessive search, this book comes off as both a riveting historical mystery as well as a wonderful example of how a person’s passions might take them places they never imagined they might travel. The future isn’t written in stone but it might just be written in bones.

It was kind of a goofy idea. The sort of thing a person might consider off-handedly then forget about five minutes later. But for Adrienne Mayor, the idea stuck. It was simple too. You see, after doing lots of research at the American School of Classical Studies in Athens, Ms. Mayor noticed a strange pattern. Reading texts by ancient Greeks she noticed that when they discussed creatures like griffins they always sounded like they knew about these animals firsthand. Is it possible that these creatures were conjured up after the Greeks found some ancient bones of one kind of another? Not a natural born scholar, Adrienne always considered herself more of an artist than anything else. Still, this question about the griffin’s origins intrigued her. What she could not have expected was how her search would take her from Greece to Samos to The Museum of the Rockies to distant China. Infinitely interesting, illustrated with multiple photographs, sketches, ancient images and contemporary illustrations, Mayor not only shows where our ancestors got their seemingly goofy ideas, but gives these people a form of credit and respect that is certainly their due.

There are no notices for this title yet.

There are no quotes for this title yet.

Find it at CHPL