Saved Searches Advanced Search
The Library is closed until further notice. No materials are due and we are not charging late fees. Click here for updates on all Town services.
Print 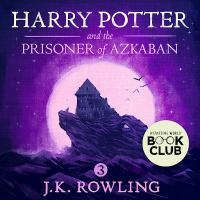 Harry Potter and the Prisoner of Azkaban

"'Welcome to the Knight Bus, emergency transport for the stranded witch or wizard. Just stick out your wand hand, step on board and we can take you anywhere you want to go.'"When the Knight Bus crashes through the darkness and screeches to a halt in front of him, it's the start of another far from ordinary year at Hogwarts for Harry Potter. Sirius Black, escaped mass-murderer and follower of Lord Voldemort, is on the run—and they say he is coming after Harry. In his first ever Divination class, Professor Trelawney sees an omen of death in Harry's tea leaves...But perhaps most terrifying of all are the Dementors patrolling the school grounds, with their soul-sucking kiss..
Publisher: Valley View : Pottermore from J.K. Rowling, 2012
Edition: Unabridged
ISBN: 9781781102657
Branch Call Number: NCKIDS eAudio
Characteristics: 1 online resource (12 audio files) : digital
Additional Contributors: Dale, Jim

By far the most popular series this summer! Folks who suggested this book said it made them laugh, cry, bite their nails, feel like they were there, and think. It's suggested for fans of CS Lewis's Narnia series.

Great third entry in a wonderful series. Prison of Azkaban is my favorite from the film series and also one of the better books I have read in the series so far.

I am a HUGE HARRY POTTER FAN, since childhood till now. There are 7 titles in total, where the last book is split into 2 parts. All of these series have already been made into movies, which in my opinion, is better to read all of the books FIRST before you delve into the films. Books generally have more details and sometimes certain parts of the movies are different than the novels - surprise, surprise!

This 3rd book is 1 of my favourites, especially the middle and ending became quite shocking for me! All of Harry's adventures were never dull and always filled with great surprises with his 2 best friends, Ron and Hermione. If you particularly love adventures, fantasy, magic, wizards/witches, and surprises, Harry Potter is the one recommended for you!

This series gets better with each book. I definitely recommend it.

This has been my favorite so far. The main thing I didn't like about this one was how much they focused on Ron's rat and on Hermione having an impossible schedule. I thought the movie was alright but I liked the audiobook more. I am excited to see what happens next with Sirius Black.

Loved it, another great story in the series

This is definitely one of my favorites in the series! It's captivating, suspenseful and fun.

What a continuation! The introduction of new characters, such as Remus Lupin and Sirius Black was just what the story needed. And with them come a deeper look at Snape’s feelings about Harry.

The story of Harry Potter gets darker as he goes back for his third year at Hogwarts. This is the beginning of the characters realizing that Dumbledore can’t solve everything. There is also a deeper look at the main trio.

This book is a great third addition to the Harry Potter series, and it promises that next year will be even better and darker. This book series grows with Harry, as well as its audience. Recommended if you want more of the Wizarding World!

In this series by J.K. Rowling, this was the book that made me realize that I was part of something that was going to go big. In this third book, you start to see the development of a plan - that extends a little beyond a young boy going after a singular bad guy over and over again. I loved the introduction of Harry's Godfather Sirius Black - who is one of my favorite multi-layered characters in the entire series.

Rallanb thinks this title is suitable for 14 years and over

shanika_3 thinks this title is suitable for All Ages

vaasu thinks this title is suitable for 10 years and over

red_lion_5184 thinks this title is suitable for 10 years and over

navy_nightingale_207 thinks this title is suitable for 10 years and over

angeleeknguyen17 thinks this title is suitable for 6 years and over

ravenclawblue thinks this title is suitable for 10 years and over

meslee4 thinks this title is suitable for All Ages

red_badger_492 thinks this title is suitable for 9 years and over

“Happiness can be found, even in the darkest of times, if one only remembers to turn on the light.”

“I dreamed I was buying new shoes last night," said Ron. "What d'ya think that's gonna mean?"
"Probably that you're going to be eaten by a giant marshmallow or something," said Harry.”

"That suggests that what you fear most of all is - fear. Very wise, Harry."

"That brings her total of real predictions up to two. I should offer her a pay raise."

“From now on, I don’t care if my tea leaves spell, ‘Die, Ron, die,’ I’m chucking them in the bin where they belong.” -Ron Weasley

“A cat? Is that what they told you? It looks more like a pig with hair if you ask me.” -Ron Weasley

"Happiness can be found in the darkest of times, if one only remembers to turn on the light."

"I solemnly swear that I am up to no good."

Mooney presents his compliments to Professor Snape, and begs him to keep his abnormally large nose out of other people's business

"Mooney presents his compliments to Professor Snape, and begs him to keep his abnormally large nose out of other people's business."

"Mr. Prongs agrees with Mr. Mooney and would like to add that Professor Snape is an ugly git."

"Mr. Padfoot would like to register his astonishment that an idiot like that ever became a professor."

"Mr. Wormtail bids Professor Snape good day, and advises him to wash his hair, the slimeball."

"Right, Neville," said Professor Lupin. "First things first: what would you say is the thing that frightens you most in the world?"

Neville looked around rather wildly, as though begging someone to help him, then said, in barely more than a whisper, "Professor Snape."

Harry Potter's third year at Hogwarts starts off badly when he learns deranged killer Sirius Black has escaped from Azkaban prison and is bent on murdering the teenage wizard. While Hermione's cat torments Ron's sickly rat, causing a rift among the trio, a swarm of nasty Dementors is sent to protect the school from Black. A mysterious new teacher helps Harry learn to defend himself, but what is his secret tie to Sirius Black?

The book starts off with a BANG! right before Harry's thirteenth birthday. Harry blows up his aunt, experienced an adventures ride on the Knight bus, only to find out that Sirius Black, the traitor responsible for his parents' deaths, a notorious mass-murderer and Voldemort supporter, has broken out of Azkaban and is now out to kill Harry! But things are not as always as they seem...

Harry Potter is heavily protected at Hogwarts from Sirius Black, yet he always finds a way to get into an adventure! Will he survive this one?

Harry Potter and the Prisoner of Azkaban opens on the night before Harry's thirteenth birthday, when he receives gifts by owl post from his friends at school. The next morning at breakfast, Harry sees on television that a man named Black is on the loose from prison. At this time, Aunt Marge comes to stay with the Dursleys, and she insults Harry's parents numerous times. Harry accidentally causes her to inflate. Harry leaves the Dursley's house and is picked up by the Knight Bus, but only after an alarming sighting of a large, black dog. The Knight Bus drops Harry off at Diagon Alley, where he is greeted by Cornelius Fudge, the Minister of Magic. He rents a room and awaits the start of school. In Diagon Alley, Harry finishes his schoolwork, admires a Firebolt broomstick in the window of a shop, and after some time, finds his friends Ron and Hermione. At a pet shop, Hermione buys a cat named Crookshanks, who chases Scabbers, Ron's aging pet rat. Ron is most displeased. The night before they all head off to Hogwarts, Harry overhears Ron's parents discussing the fact that Sirius Black is after Harry.

After barely surviving an attack from Dementors, Harry Potter arrives to Hogwarts School od Witchcraft and Wizardry, excited and ready to start his third year in magical education! But the school is currently under threat by a criminal named Sirius Black, therefore Dementors, creatures who suck out all the happiness in people, have come to guard the School. But why do the Dementors tend to affect Harry more than everybody else? And what is the REAL story behind Black's history?

enjoy harry when he tries to escape from siruis black, the guy who betrayed his parents, but at the end he finds something really strange

Harry Potter and the Prisoner of Azkaban....

Violence: Lots of unconsciousness, biting, and falling off brooms

Find it at CHPL