Saved Searches Advanced Search
THE LIBRARY IS CLOSED TO PARK AND PICKUP SAT 1/16 DUE TO A POWER OUTAGE. HOLD EXPIRATIONS ARE BEING EXTENDED!
No Park & Pickup service on Monday, January 18 in observance of Martin Luther King Day.
Comment
d
dgiard 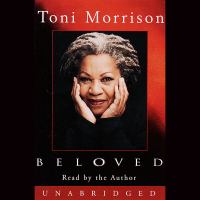 "Beloved" by Toni Morrison is a ghost story. But the haunting is far from the most disturbing part of this book.

Eighteen years ago, Sethe and her children escaped the Kentucky plantation "Sweet Home" to find refuge in Cincinnati at the home of her mother-in-law Baby Suggs. Now, the Civil War is over, Baby Sugs has died, Sethe's two sons have run away, and the house is occupied by Sethe, her daughter Denver, and the ghost of her dead 2-year-old daughter known only as "Beloved".

The townsfolk shun the house - known only by the partial address of "124". Presumably, they avoid 124 because of their fear of the ghost within; but, as the story unfolds, we learn of the tragic secret that drove a wedge between Sethe and the local community.

But Morrison deals explicitly with many issues - particularly the dehumanizing aspects of slavery. Families were separated permanently; people were stripped of their names (most of the male slaves at Sweet Home were named "Paul"); beatings were common; negroes were compared to animals; and sexual assault went unpunished. For some, death was preferable to a life of slavery.

This was my second reading of "Beloved" and I am glad I returned to it, even after 20 years. The story is sometimes difficult to follow as it includes numerous shifts in time and perspective. Much of the book reads more like poetry than prose, forcing the reader to approach each chapter deliberately and more slowly than most novels.

But the extra effort pays off in this beautiful and tragic story.